The evening session of DC Dance Challenge will be a night to remember…On October 23, Saturday evening, the glamorous Edison Ballroom (equipped with a 2400 sqft dance floor) at the Westin Alexandria will be hosting a Show and Dance. Spectators will enjoy a fine evening, with a huge professional dance floor, a great DJ, cash bar, plenty of dance attractions, and opportunity to dance socially.

General Dancing. Our music director is preparing the best hits to please any type of partner dancer. When comes to entertainment here are the main  attractions to be seen:

Dancing with the DCDC Stars. If you like the dancing show on TV. It will be an opportunity to see the DCDC version in person and to vote for your favorite finalist performer. 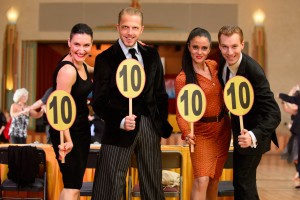 Superstars of Dance Professional Show
Brought to you by DancingTrips.com  – Tango Passion in Buenos Aires 2022

Do you want to know more about our DCDC Pro-Show Superstars?

Sergey and Oksana both originally from Russia, they are now representing USA. They started dancing together in October in 2017 and immediately achieved outstanding results. Just in 2018-2019 from their participation in professional ballroom competitions all over the country, they received around 21 first places and became multi time Ballroom Champions in their division.

Currently, they are recognized as one of the best Ballroom Dance couple in USA, World Showdance couple, successful Pro-Am competitive teachers, and coaches teaching International and American style and social dance who focus not only on the intense training demands of competitive students but also on having fun and finding the joy in everyday leaning and improvement for their students.

Sergey started to dance when he was 9. After just few months, he won his first competition in Russia. Through the years of training and competing Sergey was a multi time winner of regional and federal level championships. After finishing high school, he paused his competitive dance career to pursue law degree. After moving to US Sergey continued to dance competitively both with his students and a newly found partner.

Oksana is a Ballroom/Latin/Argentine tango dancer, choreographer & dance host who appeared often on the TV dance shows in her native country. She was born in Russia and took up ballroom dance at age 11. She was trained in Ballroom, Latin and Performing Arts with the best coaches in Russia. She emigrated to USA after graduating with Master Degree in Pedagogics and Linguistics and started working as Office Manager and Adoption Regional Program Director. After several years she decided to come back to teaching and dancing professionally. Besides being finalist of many USA competitions in Ballroom division, she is also known as Finalist of Salon and Stage division of National Argentine Tango competitions.

She started dancing when she was 5 years old with Argentine Folklore and at 12 she started with tango. When she was 18 she got the degree of Argentinean Folk teacher. 2004‐2010 ‐ Member of the UBALLET (Ballet de la Universidad de Buenos Aires), Mora Godoy’s Tango Company, Juan Corvalán’s Tangomalambo’s Company, and Roberto Herrera’s Company, with tours which travelled worldwide. 2005‐ 2006 ‐ Italy: shows “Tango Querido” (Barletta), “Noche porteña” (Matera) and “Patio Argentino” of Tango and Folklore (Rome) 2007‐2008 ‐ Greece: lessons, seminars, and dancer of the show “El Bandoneón”, Athens. 2011 ‐ Misterio Tango Festival (Argentina) 2009 ‐ 2012‐ She traveled to various cities in South America, Europe and Asia, teaching courses and seminars. (Greece, United Kingdom, Poland, France, Italy, Portugal, Dubai,Brazil y Chile) 2012 ‐ Korea (World Yeosu Expo), dancer of the show in the Argentina’s pavilion. 2007 ‐ until now‐ works in local tango shows in Buenos Aires, such Complejo Tango, Michelangelo, Taconeando, Piazzolla Tango,Gala Tango and Tango Porteño. 2014 ‐ Principal Dancer at the show Glorias Porteñas (Evita tribute), partnering Juan Carlos Copes. Together with Junior Cervila: 2015 ‐ Tango e Paixão’s Show (Brazil) 2015‐2016 Principal Dancer at the show Piazzolla Tango Tango Cabaret’s Show‐ Teatro Avenida ‐ Buenos Aires. Classes and performances in New York, Washington DC, London, Moscow, St Petersburg (White Nights Festival) Los Angeles, Miami and Toronto (Canada) 2017 – Judge of the USA Tango Championship. Performer and Choreographer of tango in Andrew Loyd Webber’s “Evita” directed by Josh Rhodes in USA.. Junior Cervila was considered by New York newspapers “the Gene Kelly of Latin Dance”. Originally born in Brazil and based in Buenos Aires, where the tango got into his blood, has a extensive professional history that includes performances on Broadway (NY) at Gershwin theatre with “Tango Argentino”, also performed at Lincoln Center and Town Hall in New York, danced in the film “Tango” by Carlos Saura, nominated for the Academy Award as Best Foreign Film and travelled the world with the show of Julio Iglesias. He filmed for the BBC with the prima ballerina of the Royal Ballet of London, Deborah Bull, and developed one of the leading roles in the successful musicals “Tanguera”, “Piazzolla Tango” and “Tangorama”. He was elected to a private tango show the Rolling Stones on tour in Argentina in 2007. He danced with the orchestra of Daniel Barenboim in late 2006. He danced in Buenos Aires at Luna Park, Gran Rex, Teatro Opera, Teatro Colon and the Nueve de Julio in a historic concert of “Tango Argentino” to 15000 people. Since 2001 runs his own company “Latin Dance Company” in which fuses salsa, tango, samba and flamenco. He is considered by many as the best and most versatile dancer nowadays. He starred “Tanguera in Amsterdam, London (Saddlers Wells), Basel, Munich, Paris (Theatre du Chateler), and traveled USA, Moscow and Italy with his own show. 2014 to 2016- He was the choreographer of “Piazzolla Tango” and “Tango Porteño”. Two of the most prominent tango shows in Buenos Aires seasons. Also he is the judge of the finals Tango world Championship. 2017 – Judge of the USA Tango Championship. Performer and Choreographer of tango in Andrew Loyd Webber’s “Evita” directed by Josh Rhodes in USA.

Have you visited the DCDC Hall of Fame page? See whose name is marked on those glorious virtual walls. Click Here! If you are competing this maybe be your chance to be part of this thrilling history.

Competitors in package have special seating/tables  assignment, if you are a spectator part of group please consult with your school manager for pricing.
The remaining spectator seats for the DCDC evening session will be sold at $65.
To Purchase Your Spectator Admission Ticket Online Click Here!
You will be directed to DCDC/Forever Dancing Ballroom  merchant website where you can pay for your Spectator Admission Ticket(s)